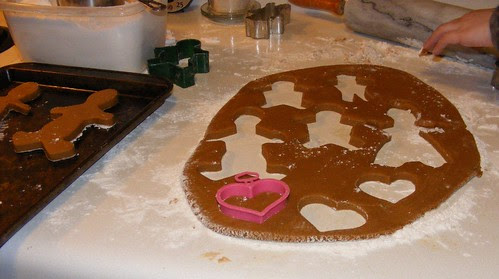 The calendar said December 12th and because gingerbread was written plain for all to see it must be Gingerbread Men Day, indeed. Red woke, scurried to the kitchen, and grabbed the footstool. Dragging it to the calendar on the wall, he had to make certain, “Yes, today’s the day.”

“Wake up Mimi!” the brown –eyed boy said while patting my arm. “Today is gingerbread men day!” Enthusiasm coursed through his limbs as patting turned to pulling, until I finally got up.

Before gingerbread making could begin, I had to have my coffee. The little boy stood close-by, patiently waiting for Mr. Coffee to gurgle and give one final gulp so I could fill my cup with the magical morning elixir that forces my blurred eyes to open wider and begin the day. We were sipping our favorite drinks when Manda joined us, rubbing the sleep from her eyes before filling her favorite mug with lightly creamed coffee. Redding chattered the lively talk of a six year old, while Manda and I pondered the clouds in our coffee.

Next, came a quick breakfast, getting dressed and oh my we must run to the store and pick up a few things. The patience of a little boy amazes me sometimes. Redding crawled into the car with only a barely audible mumble, “…but what about the gingerbread men?”

Fill the cart with this and that, stop and talk to acquaintances, stand in line, pay, and now the tummy is grumbling again and it’s time for lunch. More waiting, eating lunch, and away we go again. Passing a store, I suddenly remembered the wrapping paper I’d had my eye on for a couple weeks.

Out we all tumbled and into the store we went like a small band of merry makers. Who can go into a store and not browse? Time floated by as we “oooed and aahhed” over ornaments, toys, ribbons, and bows, but only the wrapping paper in red and cream came home with us.

Back at home canvas bags filled with ‘stuff’ were unpacked and put away. The wrapping paper joined the colorful throng in the closet and two ladies sat down for a breather.

Redding gave me a nudge, “What about the gingerbread men?”

“Soon,” I replied with a deep sigh. And he walked to his bedroom where he quietly played with figures of medieval knights battling Star War Jedis.

Redding’s mama was the first to make a move. Out to the kitchen she went, she found the recipe, and took from the cupboard flour, baking soda, molasses, ginger, sugar, measuring cups, and spoons. A big, crockery, mixing bowl and the beaters stood at the ready. 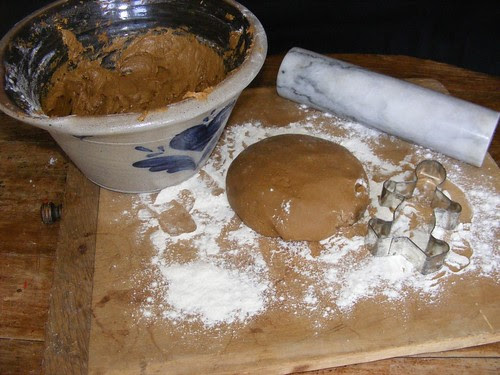 . Redding heard the commotion and came to the kitchen with wings on his feet. He found the cookie cutters and placed them on the counter as sugar poured into the bowl turned dark from the thick molasses. Flour flew as the beater whirred and mixed the batter. A quick finger gathered a bit of cookie dough and Red tasted the gingered batter. With a smile, he declared the cookie dough fit for gingerbread men, but there was more to do. 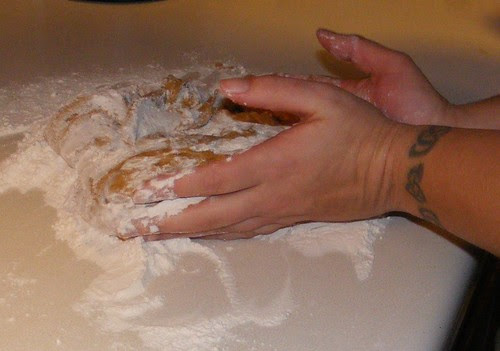 Beaters can go only so far when it comes to gingerbread men, hands must take over. With the flick of a wrist the surface was covered in flour. Manda plopped a pile of soft dough into the middle of snowy white powder. More flour poured over the top of the mound, readied it for kneading. With gentle fingers, she mixed the flour into the sticky dough until it reached just the right firm consistency. Rolled into a circle, it was time to cut. 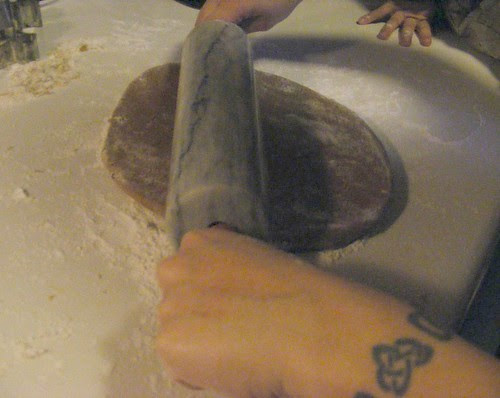 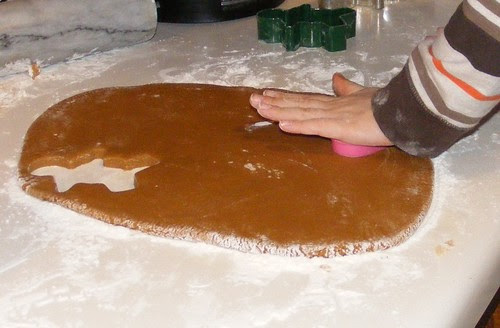 A few more touches and he’d be ready to go into the oven. Raisin eyes and a row of buttons put life into the spicy man.

Time went by so slowly while the cookies puffed and grew into delicious gingerbread men. 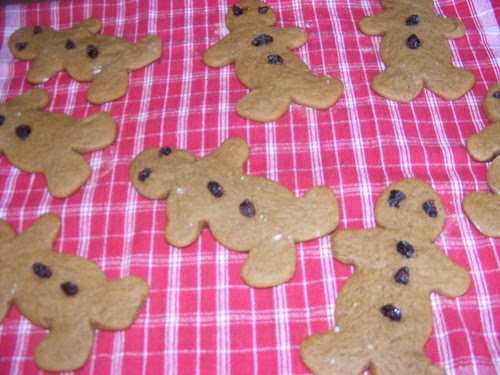 Finally, after waiting all day, gingerbread men marched from the oven to the cookie towel to cool.

Later, Redding nibbled off one leg, and then the other, his lips smacking with the spicy flavors of ginger and molasses washed down with a mug of cold milk.

This is a very special recipe to my family. It comes from my Grandma B, to my mother, to me and my siblings. I have no idea how far back the recipe does go, but I like to imagine that it’s been handed down for many generations. The recipe is unusual; no eggs are used. The recipe calls for shortening, but I’m sure Grandma B used lard. I’ve never tried it with butter for fear it would change the cookie.

My mother used a basic recipe of ingredients, which was exactly how my grandmother did it, too. This recipe must be learned through trial and error. Over time, you learn what the dough should look like, but most importantly, how it feels in your hands as you knead in the flour. For me it’s a tactile baking experience filled with the love of generations of women who came before, repeating the process, feeling the gooey dough between fingers and turning it into childhood memories.

There are no directions for gingerbread men, but over the years I’ve come up with my own way of making them that has proven to work out well.

Mix sugar and shortening together until fluffy. Stir in molasses and ginger. Dissolve soda in water and set aside. Measure out one cup of flour and pour into mixture. Add 1/3 of soda and water. Continue in thirds until all ingredients are blended.

On a smooth surface place 1/2 cup of flour. Spoon half of dough onto the flour. Measure out another 1/2 cup of flour and sprinkle on the top of dough. Carefully begin kneading the flour into the dough. Continue adding flour (1-2 cups) until the dough is stiff enough to cut.