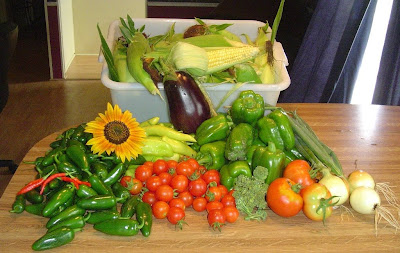 Bill & Judy’s hard work in the spring paid them back handsomely this summer. This is the time of harvesting, using, and preserving. It’s a busy time and Bill & Judy are no exception. The last of the broccoli and cauliflower has been harvested along with the end of the season sweet corn.

The pepper explosion in the garden has been a grand one and continues with tiny red-hot Asian peppers covering plants, cayennes, and green peppers turning to yellow and red. According to Bill, they picked about a hundred jalapenos and 25 Hungarian wax peppers. Large well-shaped green peppers ended up in the kitchen. Plans for peppers include pickling and drying for cold weather recipes when a bit of heat is needed. .

The tomatoes are finally coming on and one bout of canning has all ready filled the kitchen with homey aromas of tomatoes cooking. Delicious pop-in-you-mouth-warm-from-the garden cherry tomatoes are ready for picking.

Plump, purple eggplants ripen to become eggplant parmigiana or a delectable side dish for dinner. Swiss chard, onions, and carrots are harvested and being used with plans to plant more of some and less of others. The leeks are growing and Bill said, “…something tells me they’ll (leeks) will be great in our corn sauté.”

A garden is an ever-changing project discarding the idea that caused excitement in the spring, but turned less than satisfying as the year wore on. It’s replacing this variety for a new one. In Bill’s words…

“We've really enjoyed the garden! I wasn't too sure when we started this project, but to this point it's been a good time, other than the pesky weeds. We're already making plans for next year and some of the changes and additions we'll be making.”

I can’t thank my brother Bill and sister-in-law Judy enough for allowing me to follow their brand new venture into gardening and share it with readers. It’s been fun on my end and a lot of work on theirs. I sipped Margaritas and took photos while they toiled. The hard work reaps rewards beyond the dinner table…so here’s to both of you for a job well done and a great growing season. Cheers!
Posted by Jane Doe at Monday, August 31, 2009