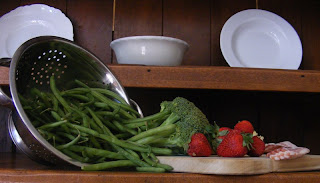 The burst of chrysanthemum fireworks in night skies punctuated the Fourth of July marking the middle of summer. July means green bean picking, yellow crookneck squash ripening, and beets pulled from the ground. It’s the height of the vegetable garden and there’s so much to do…picking, weeding, picking, hoeing, canning, picking, freezing, picking, and drying.

One of the summer traditions in my kitchen is a garden supper. Everything on the table starts in the garden except the meat and when I lived on a farm, often the meat began in the pasture that surrounded the house. Early in the day, I’d venture out to the garden with a market basket that I’d been lucky enough to acquire at an auction. I’d pick it full of supper fixin’s…crisp green beans, yellow crookneck squash, and tomatoes. Who can resist one of the simplest summer delights while picking vegetables in the garden? Just pick a big ripe tomato, wipe off any dirt and sneak a bite. The sweet flavor makes the dripping mess running down the chin worthwhile.

Before cooking a garden supper, wash, slice, dice, and snap vegetables. The children often helped me snap beans while rocking gently in the porch swing talking about Little League baseball or gymnastics. After a good rinsing, the green beans drip in the sink while the rest of the supper takes shape.

The task of frying a skillet or two of bacon starts supper in earnest. Set aside drippings for later use. Add a couple tablespoons of bacon drippings to a large pot. Toss in a diced fresh onion along with the fresh green beans. The onions and beans simmer on the back of the stove while squash is cut into thick slices and dredged in flour. Fry the squash slices in a hot skillet with bacon grease adding flavor and a crisp outside to the squash.

Wash, slice, and arrange fat tomatoes on a plate showing off the meaty goodness. The only thing left to do is prepare BLT’s for each person. A few slices of bacon crumbled over the bowl of hot green beans and onions add the finishing touch.

Garden suppers vary depending on vegetable availability. When the sweet corn grows milky plump, a platter of golden ears set in a pyramid on the table makes mouths water in anticipation. Cucumbers, broccoli, beets, and a variety of squash are garden supper possibilities. Green peppers become vessels holding a mixture of rice, meat, and cheese. Watermelon, blackberries, blueberries, raspberries, strawberries, or chocolate or spicy sweet bread made with zucchini ends the meal on a sweet, yet fresh note that continues the theme.

If you’ve never made a garden supper, give it a whirl. Pride, satisfaction, and gratitude wash over you when nearly everything on the table began in the garden.